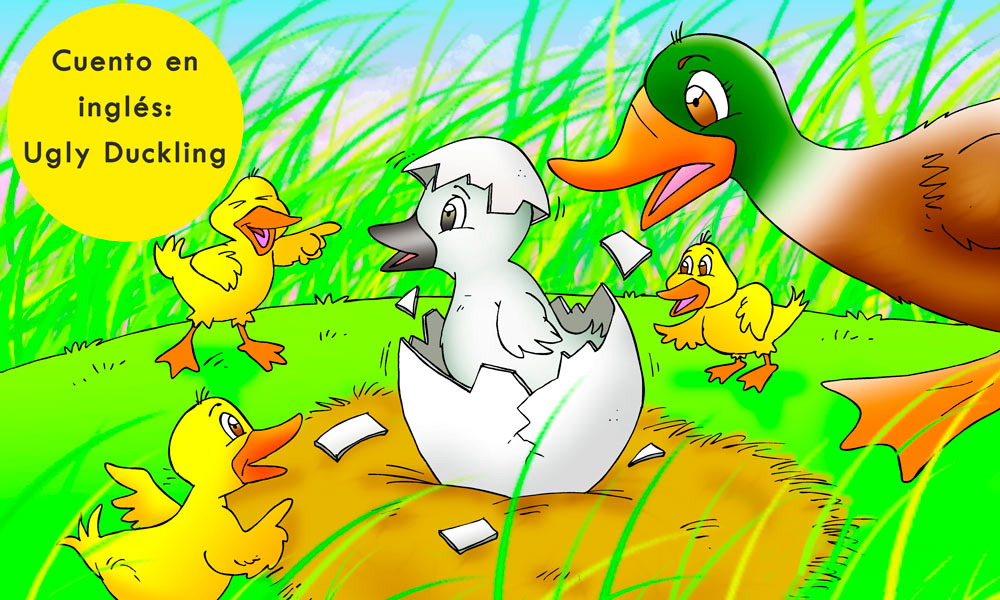 Once upon a time down on an old farm, lived a duck family, and Mother Duck had been sitting on a clutch of new eggs. One nice morning, the eggs hatched and out popped six chirpy ducklings.

But one egg was bigger than the rest, and it didn´t hatch. Mother Duck couldn´t recall laying that seventh egg. How did it get there? TOCK! TOCK! The little prisoner was pecking inside his shell.

-"Did I count the eggs wrongly?"

Mother Duck wondered. But before she had time to think about it, the last egg finally hatched.

A strange looking duckling with gray feathers that should have been yellow gazed at a worried mother. The ducklings grew quickly, but Mother Duck had a secret worry.

- "I can´t understand how this uglyduckling can be one of mine!" she said to herself, shaking her head as she looked at her last born.

Well, the gray duckling certainly wasn´t pretty, and since he ate far more than his brothers, he was outgrowing them. As the days went by, the poor ugly duckling became more and more unhappy. His brothers didn´t want to play with him, he was so clumsy, and all the farmyard folks simply laughed at him.

He felt sad and lonely, while Mother Duck did her best to console him.

- "Poor little ugly duckling!" she would say. "Why are you so different from the others?"

And the ugly duckling felt worse than ever. He secretly wept at night. He felt nobody wanted him.

-"Nobody loves me, they all tease me! Why am I different from my brothers?"

Then one day, at sunrise, he ran away from the farmyard. He stopped at a pond and began to question all the other birds.

-"Do you know of any ducklings with gray feathers like mine?"

But everyone shook their heads in scorn.

The ugly duckling did not lose heart, however, and kept on making inquiries.

He went to another pond, where a pair of large geese gave him the same answer to his question. What´s more, they warned him:

-"Don´t stay here! Go away! It´s dangerous. There are men with guns around here!"

The duckling was sorry he had ever left the farmyard.

Then one day, his travels took him near an old countrywoman´s cottage. Thinking he was a stray goose, she caught him.

-"I´ll put this in a hutch. I hope it´s a female and lays plenty of eggs!" said the old woman, whose eyesight was poor.

But the ugly duckling laid not a single egg. The hen kept frightening him.

-"Just wait! If you don´t lay eggs, the old woman will wring your neck and pop you into the pot!"

And the cat chipped in:

The poor ugly duckling was so scared that he lost his appetite, though the old woman kept stuffing him with food and grumbling:

-"If you won´t lay eggs, at least hurry up and get plump!"

-"Oh, dear me!" moaned the now terrified duckling. "I´ll die of fright first! And I did so hope someone would love me!"

Then one night, finding the hutch door open, he escaped.

Once again he was all alone. He fled as far away as he could, and at dawn, he found himself in a thick bed of reeds.

-"If nobody wants me, I´ll hid here forever."

There was plenty a food, and the duckling began to feel a little happier, though he was lonely.

One day at sunrise, he saw a flight of beautiful birds wing overhead. White, with long slender necks, yellow beaks and large wings, they were migrating south.

- "If only I could look like them, just for a day!" said the duckling, admiringly.

Winter came and the water in the reed bed froze. The poor duckling left home to seek food in the snow. He dropped exhausted to the ground, but a farmer found him and put him in his big jacket pocket.

- "I´ll take him home to my children. They´ll look after him. Poor thing, he´s frozen!".

The duckling was showered with kindly care at the farmer´s house. In this way, the ugly duckling was able to survive the bitterly cold winter.

However, by springtime, he had grown so big that the farmer decided:

That was when the duckling saw himself mirrored in the water. 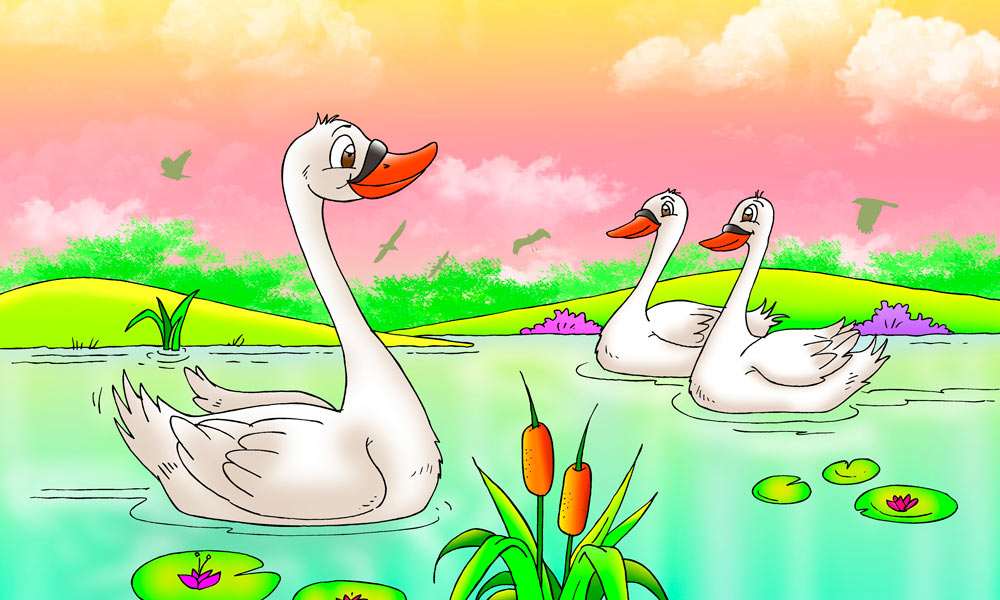 - "Goodness! How I´ve changed! I hardly recognize myself!"

The flight of swanswinged north again and glided on to the pond. When the duckling saw them, he realized he was one of their kind, and soon made friends.

-"Where have you been hiding?"

Now, he swam majestically with his fellow swans.

One day, he heard children on the river bank exclaim: "Look at that young swan! He´s the finest of them all!" And he almost burst with happiness.

We like it , my daughter wants to read more books. She love it!!!1