This childrens craft made with card or cardboard is used as a base to make more complex crowns, masks, wigs Or you can use it alone as a prince or princesa crown! 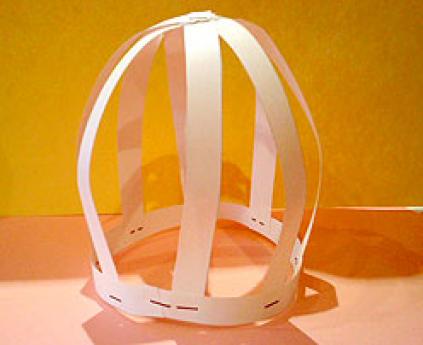 Draw a 30cm line in the card and cut it. Draw and cut eight stripes 2 cm width. This way, you will have eight stripes of 30x2 cm. Staple two stripes in an extreme to form a larger stripe.

Form a ring with that longer stripe and staple it

Staple a stripe to each side of the ring

Staple the rest of the stripes equidistantly. Shorten 2 cm the six stripes.

Staple two stripes opposite between them forming a bow over the ring. Staple the rest of the stripes superimposing them to the two first until forming a dome.