Once upon a time, there was a forest where many animals live and all of them were very good friends.

One morning a little rabbit called Thumper went to wake up the owl to go to see a little fawn who had just be born. All the animals of the forest went together to meet Bambi, which was how the new fawn was called.

All of them made good friends of them and showed them all that was in the forest the flowers, the rivers and the names of the different animals because for Bambi, everything was unknown. Everyday they met in a clearing to play. 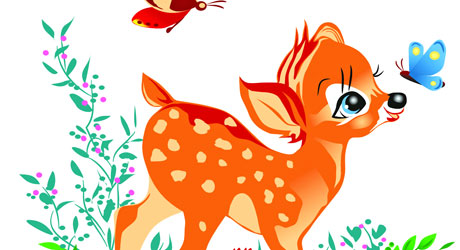 One morning, Bambis mum took her to see his father, who was the chief of the deers herd and the one in charge of watching and looking after them. While they were strolling, they heard a dog barking.

-There are men and each time they come to the forest, they try to hunt us, thats why when you heard them, you must flee and look for refuge.

Days went by and his father taught him all he had to know, because when he would be older, Bambi will have to take care of the herd.

Later, Bambi met a doe fawn very pretty called Farina, with whom he falled in love. One day they were playing and they heard a dog barking and Bambi thought Men! He tried to flee but he realised that the dog was so close that he had no chance but to face him to defend Farnina.

When she was safe, he tried to run but he came up against a precipice that he had to jump. When he jumped the hunters fired at him and Bambi was hurt.

Soon, his dad and friends came and help him to cross the river, because once they crossed it, they would be safe from men. When they managed it, they cured his injuries and he got well soon.

Time passed and our protagonist had grown up a lot. He was already an adult. He went to see his friend and it was difficult for them to recognize him because he had changed a lot and had beautiful antlers.

The owl was old and Thumper had married a rabbit and had three little rabbits. Bambi married Farina and had a fawn to whom all the animals in the forest went to meet. They all lived happily and Bambi was know in charge and looking after all of them, as his dad, who was already too old, had done before.